The coughing continued through the night and I awoke with a choice to make. To take the blue van or the white van.. Well, I might as well ride til lunch and then take the white van in.

I promptly made it to the back of the pack and had Ciaran the wonder mechanic for company as he was riding sweep. He kindly took this photo along the way. 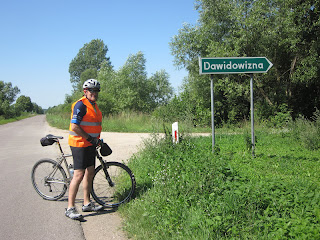 Slow and steady into lunch at 71km  hosted by Gergo but nothing much I fancied. Jules had popped some spokes yesterday and, although Ciaran had performed a minor miracle to fix the wheel, I told Jules that he could take Merlin for a spin in the afternoon. We eventually caught up around the 100km mark at an ice cream stop and I handed Merlin over for some more exercise.


Camp tonight would be at the local school ("gymnasium") which was making some extra money over the holidays. Boys were put up in the mathematics room with dinner at a local restaurant. Stuffed schnitzel as it turned out. Very tasty..Followed by a trip to the corner store for ice cream of course.

We all turned in around 8pm and it was not an uncomfortable night's sleep dorm style!

Only a few coughing fits during the night which got drowned out by the snorers to some degree. 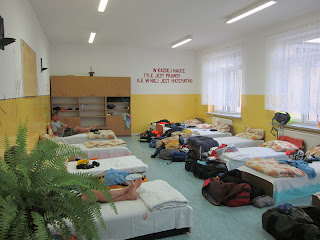 Another half day for me but, as some-one once said to me on a Ciclismo trip , "it's my vacation!!" The weather has been warmish and the riding reasonably pleasant so let's just take it a day at a time.
at July 28, 2012

Onyabike
I started spin cycling in 1995 and in 2004 set off on my first outdoor tour in Italy with Ciclismo Classico. They fell over laughing when I told them I rode a Schwinn Spinner back home and I fell off, but not laughing, for the first 3 days until I got used to unclipping. I have since cycled all over Italy with Ciclismo. In 2006 I was the first Aussie to do IsraelRide from Jerusalem to Eilat and I’ll be riding my tenth in 2019. After cycling from Paris to Istanbul in 2011 with TDA, I rode the Trans Europe Tour from Vilnius to Barcelona in 2012 and then joined the TDA Alumni in Rome before my annual ride in Israel. 2014 saw me on the Darwin to Melbourne segment of TDA Trans Oceania. 2013 had back to back trips in October/November in Jordan and Israel and in 2014 I cycled Yucatan and Cuba. In 2015 I cycled Gourmet Piedmont with Punto Tours led by my Ciclismo friend Cristiano. After 3 years off the bike, I have big plans for 2019 cycling Viva Italia with TDA followed by my tenth IsraelRide. On my bike tours this year I am again fundraising for The Arava Institute. Tax deductible donations in US or Australia can be made using the links at the bottom of this sidebar. 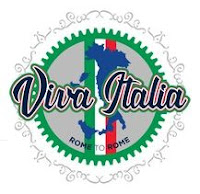